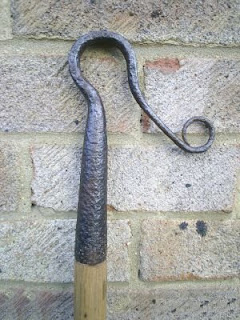 The shepherd's crook or Cromach that has the horn head is a Scottish invention. The English shepherd traditionally used an iron leg crook like this one pictured. The horn crook has now supplanted the iron crook in the UK and the US.

"The English shepherd traditionally used an iron leg crook like this one pictured."

This depends entirely what you mean by "traditionally" - certainly it was the case throughout modern history (that is to say after the medieval period), but in Saxon and medieval England a completely different crook was used and in a very different way.

Twelfth century English shepherds, for example, used a "self-wood" crook, a straight length of green wood that had been heated and bent into a wide curve - this curve became the bottom end of the crook, the top (straight) end being held in the hand.

There are dozens of illustrations of this practice, since Bibles and other manuscripts regularly depicted the Annunciation to the shepherds, who are dressed and equipped as English rustics. I have collected a number of these images in my research into all things 12th century.

Alongside this crook, some shepherds were depicted holding the standard walking stick of the time - it had a short crossbar fixed to the top, creating a T-handle. My theory is that the use of the crook as a practical tool declined as it became used more as a walking stick, which is what most real shepherds use it for today (although they are loathe to admit it, sticking to the "traditional" story of pulling sheep from bogs, etc. - how many have actually done that?). Hence the crook being reversed over time to provide a better handle. Today, all shepherds hold their crooks upside down in this way.

I can provide an image to illustrate this point if required.

Sir, My husband was norfolk Shepherd, he died in 2011 aged only 65. He used the iron leg crook and a smaller one for lambs until the early 90's- he also had a iron dipping crook- with the T shaped curved head( These crooks are now with a friend) We also slept out with the flock during lambing up until 19889 not in a traditional hut, but a tarpulin made up on a trailer bed. my email ebarnowl@hotmail.co.uk