I think this is bad science! 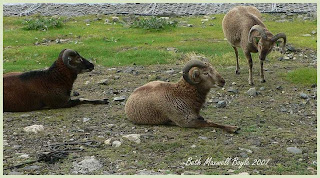 Soay rams photographed by Beth Maxwell Boyle on Hirta in 2007.

Although I think global warming is real I think this theory is bunk. I have been to Hirta and there is a British military base there and there are many other factors that could lead to problems with the sheep loosing size including food quality. There is always a human presence on Hirta and these sheep are semi-domestic dating to Viking times not wild animals. Not only that, they over graze the island and then they die back because of it when the cold weather sets in each winter season. I was told by a sheep researcher there they have up to a 70% die back of the population every winter which shows clearly the gene pool is shrinking. If you raise sheep as I do you know inbreeding is one the fastest ways to shrink a sheep. I have lost size in my flock of sheep due to lack of genetic variation from time to time because I keep a rare breed in North America and cannot always find new genetic material to bring into my flock. I think this article is bad science.

"Climate change is causing a breed of wild sheep in Scotland to shrink, according to research."

Classic evolutionary theory would predict that wild sheep gradually get bigger, as the stronger, larger animals survive into adulthood and reproduce.

Reporting in Science journal, the team says this shows the "subtle interplay" between evolution and the environment.

Scientists first began studying Soay sheep, on the island of Hirta in the St Kilda archipelago, in 1985.

Since then, the sheep have decreased in size by 5% - their legs getting steadily shorter and their body weight decreasing.

This strange phenomenon was first reported in 2007, but the reason for it remained under debate.


"The island is almost like a natural laboratory - there are only the sheep and the vegetation there," he said.

He and his team had access to detailed information about the sheep that had been collected over more than two decades.

"We have so much great data," said Professor Coulson, "that we were able to write a ledger of how much of an effect each of the different factors had on the sheep."

They used a formula called the "Price equation", which was designed by evolutionary theorist George Price to predict how a physical trait, such as body size, will change from one generation to the next.

With all of this data, the team was able to "rearrange the equation" and use it to work out how much of a contribution each driver made to the sheep's body size.

They found that the local environment had a stronger effect on the animals than the evolutionary pressure to grow larger.

"In the past, only the big, healthy sheep and large lambs that had piled on weight in their first summer could survive the harsh winters on Hirta," said Professor Coulson.

Because of climate change, he explained, grass for food is now available for more months of the year on the island.

"Survival conditions are not so challenging - even the slower growing sheep have a chance of making it, and this means smaller individuals are becoming increasingly prevalent in the population," he said.
"Young mums" tend to give birth to smaller lambs


The team also found that younger sheep tended to give birth to smaller lambs - a phenomenon they termed "the young mum effect".

This effect, said Professor Coulson, combined with environmental changes had "overriden what we would expect through natural selection".

As for the future of the sheep, the team believes that they are still shrinking.

"The next step is to extend our description of past change into a predictive model," said Professor Coulson.

"But it's too early to say if, in 100 years, we will have chihuahuas herding pocket-sized sheep."
Posted by Gimmer at 10:36 PM