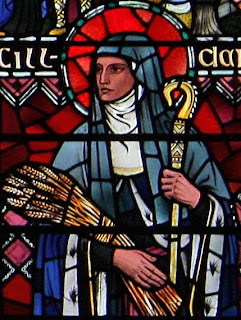 Saint Brigid of Kildare or Brigid of Ireland (Brigit, Bridget, Bridgit,or Bríd) (Irish: Naomh Bríd) (c. 451–525) is one of Ireland's patron saints along with Saints Patrick and Columba. Her feast day is February 1, or Candlemas, the traditional first day of spring in Ireland.

Saint Brigid was not given to sleep,
Nor was she intermittent about God's love of her;
Not merely that she did not buy, she did not seek for
The wealth of this world below, the holy one.

Celebrating Saint Brigid’s Day was often focussed not only on the saint herself but also on cattle and dairy ... of which Brigid is the patron saint. Here is a list of traditional things to do on of before February 1st, Saint Brigid’s Day: 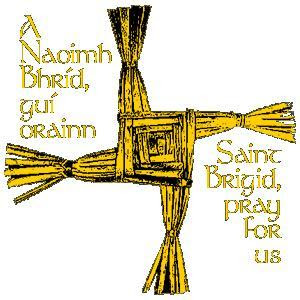 These crosses are traditionally made from rushes, but today many materials (and sometimes even different regional designs) are used. Any material used for making the cross should ideally be blessed. You may note that the design of the Saint Brigid’s Cross is straddling the pagan and Christian world – while it is a cross, it also is similar in design to a fylfot or swastika. The finished cross is hung on the inside of a thatched roof above the front door. In a pinch the inside of your front door will do. Saint Brigid’s Crosses are left in their place for the year and renewed on the following Saint Brigid’s Day.

Saint Brigid was known to travel the countryside, blessing households as she went ... accompanied by a white cow with red ears. You should make her feel welcome, just in case she passes by - placing bread and fresh butter on the outside windowsill, together with corn for the cow, usually does the trick. Also remember to lay out some rushes for her. These are to kneel on while blessing the household.

A piece of white cloth or a white silk ribbon was hung on the outside of the front door for the Saint to bless.


On Saint Brigid’s Eve, in many areas the Bridie Boys would tour the 'hood, carrying an effigy of the saint, called the Brideog ... basically a doll in white clothes. They had the right to pick up the offerings left out. Coming around they would chant some ancient (though not very poetic) rhymes like:

Here is Brigid dressed in white,
Give her a penny for her night,
She is deaf, she is dumb,
She cannot talk without a tongue.

Considering the quality of the verses, I cannot help but think that being deaf and dumb might have been a blessing in disguise.

In some areas the Brideog was not a doll but the purest girl of the village. One can just imagine the auditions for this and the reactions of unsuccessful candidates (and their parents).

On a smaller scale a door ceremony is held in many households. The eldest daughter will represent Saint Brigid, knock and ask to be let inside by intoning: „Go on your knees, open your eyes, and let Brigid in.“ The rest of the household would then answer: „Greetings, greetings to the noble woman.“ Cue a door flung open wide and a family dinner.

Give (Your) Animals a Share in Saint Brigid’s Name 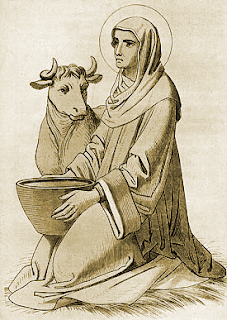 Traditionally, farm animals would be especially well taken care of on Saint Brigid’s Day. There you go – if you don’t own a farm, give your companion animal a special treat. Or make a donation to the local humane society or animal shelter.


An Irish celebration without a drink? Near impossible ... Brigid was after all famous for brewing ale. So feel free to have a pint. In honour of the saint, naturally

"Considering the quality of the verses, I cannot help but think that being deaf and dumb might have been a blessing in disguise."

Speaking of being deaf... a couple of months ago, while I was reading early one morning I suddenly lost all of the hearing in one of my ears. Just like that. Poof and it was gone, and never to return or so says the doctor. Isn't that just the oddest thing? I never realized how incredibly handicapping being monaural would be but now I know. And it is indeed. But on the plus side, I've enriched my vocabulary with all sorts of impressive words like "monaural";)

Wow that is wild about your hearing. When Dad lost most of the hearing in one ear I learned for the first time what that means.