Our hame behind the apple tree. 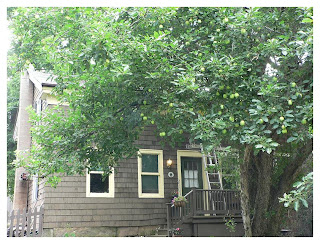 Posted by Gimmer at 4:46 PM No comments:

Here is a recipe for a strong scrumpy!

Method
Chop and grind the apples and raisins. These days a food processor will do the trick
Use a brewing barrel with an airlock - sort of thing Boots sell
Put the ground apples and raisins into the water with the chopped meat.
Stir thoroughly
Add the yeast and seal the brewing barrel with the airlock
Everyday swirl the barrel to stir the ingredients
after the first fermentation slows, about 8-10 days, move to a similar vessal for seconary fermentation.
If you like a dry cider, add a second dose of yeast to the secondary fermentation. Seal with an airlock.
Let it sit until it the fermentation slows to a very slow, almost imperceptible bubble.
Move to a carboy to let the heavier particles settle out.
Let it sit for about a week and bottle.
The scrumpy will need to mature for about four months before you will want to even try it since it will give off a strong unpleasant smell and almost vinegary taste.
The longer it is allowed to mature, the better,smoother and drier it will get.
Here is a recipe for a strong scrumpy. One glass and the world seems a better place, two glasses and you probably do not remember.

Posted by Gimmer at 4:35 PM No comments:

An Apple Crop to Remember! 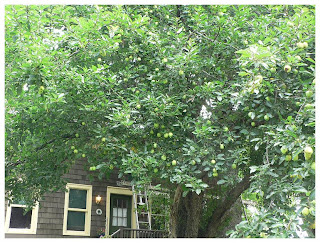 The wonderful Russet Apple Tree!
Posted by Gimmer at 4:30 PM No comments:

My Russets are coming along nicely! 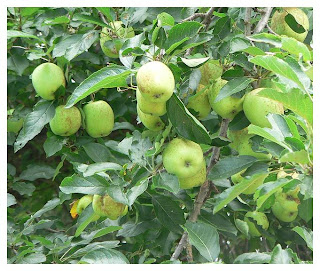 Posted by Gimmer at 4:21 PM No comments: 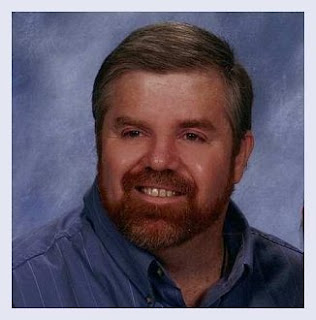 How delicious is the winning
Of a kiss at love's beginning,
When two mutual hearts are sighing
For the knot there's no untying!

Ye remember, 'midst your wooing,
Love has bliss, but Love has ruing;
Other smiles may make you fickle,
Tears for other charms may trickle.

Love he comes, and Love he tarries,
Just as fate or fancy carries;
Longest stays, when sorest chidden;
Laughs and flies, when press'd and bidden.

Bind the sea to slumber stilly,
Bind its odour to the lily,
Bind the aspen ne'er to quiver,
Then bind Love to last for ever.

Love's a fire that needs renewal
Of fresh beauty for its fuel:
Love's wing moults when caged and captured,
Only free, he soars enraptured.

Can you keep the bee from ranging
Or the ringdove's neck from changing?
No! nor fetter'd Love from dying
In the knot there's no untying.

Posted by Gimmer at 2:45 AM No comments:

Our 28th Wedding Anniversary is Today! 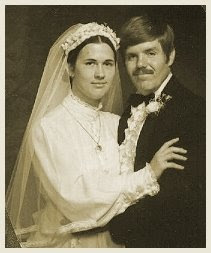 Posted by Gimmer at 2:38 AM No comments: 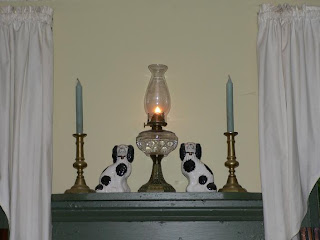 Oor Granny had twa wally dugs upon her lobby table.
She dusted them maist every day as lang as she wis able.
Bit then ,when Granny passed awa' ,oor Maw wis systematic.
And pit them in a cardboard box and shoved them up the attic.
They lay wi' Granny's bits an' bobs an' things that she did treasure.
A' wrapped in paper an' sich like ,jist as a safety measure.

The dugs lay there near sixty year, syne Mither passed awa'.
As son and heir they fell tae' me, I thocht that they were braw.
I brocht them doon an' set them up upon a fancy dresser.
I showed them tae' my ain guid wife, wha' ca'd in the assessor.
We're keepin' Granny's wally dugs, this attitude is healthy.
Bit when we sel't her bits an' bobs they made us raither wealthy.
Posted by Gimmer at 1:33 AM No comments: 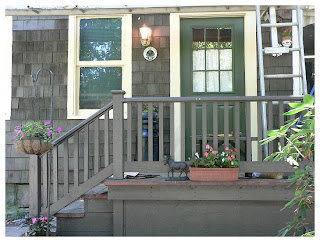 I haven't been blogging much.  There has been too much going on here.  We are painting the house and working around here most days on making ready for winter.  We put some more hay in the mow and are getting ready to start stacking firewood as well. The apples on the tree are growing like crazy. It looks like we are really going to have allot of apples.  The tree has never had so many in the 22 years we have lived here. Here is a photo of the new house colors.
Posted by Gimmer at 12:02 AM No comments: