What Happened to Christian Anointing - How Did We Lose it in History? 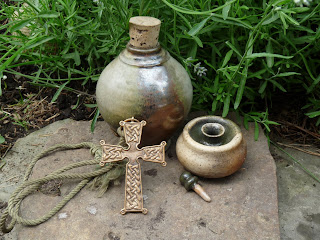 By the Middle Ages, anointing in the Christian church was pretty much the prerogative of a male catholic priesthood. Rules had been set down on who could and could not anoint. Unlike the early Christian era where laypeople-both men and women could use essential oils to anoint for healing-that role was now in the hands of the ordained priests who were by then only men. Anointing for healing had become a sacrament of the church and the oil used was "symbolic" at best.

After the Reformation in the 1500's the laying-on of hands and anointing along with its required donations fell into disfavor among most of the new Christian denominations and the use of blessed oils and many other Christian rituals were discarded.

The Roman Catholic Church continued its practice of blessed oil for this final anointing even though the true meaning of anointing for healing of physical and spiritual health appeared to be lost. The sacrament of anointing became "extreme unction" performed by the priest at one's final breath.

The Anglican Church allowed for anointing in the visitation of the sick. Anointing was limited to the forehead and breast in contrast to the sevenfold anointing (eyes, ears, nose, mouth, hands, feet and heart) practiced to that date.

For most of the reformers, anointing was interpreted as the "inward anointing of the Spirit." They believed that the external rite, although acceptable in the first century, was no longer needed. There were occasional justifications for anointing of the sick, but they were almost apologetic in tone as they protested Roman abuse of unction.

It was actually not until the last 40 years, a lapse of over 500 years, that a renewed interest in the healing power of anointing with oil began to reshape the Catholic Church's understanding of the anointing of the sick. Even though anointing for healing was restored, it still used "symbolic" anointing with only little fragrance of an essential oil.

In recent years Protestantism has seen a number of revivals of anointing of the sick.

The 1979 American Prayer Book (Episcopalian) provides a form for the priest to bless the oil for anointing the sick and the rubrics state that when necessary, a deacon or layperson may perform the anointing.

In the Lutheran tradition, provision is made for anointing in the Occasional Services (1982). After the laying on of hands in silence, the minister may "dip a thumb in oil, make a sign of the cross on the forehead," and pray that, as the apostles anointed and healed many who were sick, so the Spirit may be given to the one anointed with oils that he or she "may in repentance and hope be made whole."
The Book of Worship (1986) of the United Church of Christ and the Presbyterian Holy Baptism and Services for the Renewal of Baptism both contain forms of anointing.

The hard-lined belief that anointing was superstitious doesn't seem to carry the same weight that it once did. Small groups reading the Scriptures have felt called to restore the use of oil for healing. Clearly-anointing with oil is beginning to become a sign of hope for many who suffer physically, emotionally and spiritually.