The Witch Ball or Watch Ball

A witch ball or watch ball is a hollow sphere of plain or stained glass hung in cottage windows in 18th century England to ward off evil spirits. They were often placed on top of a vase or suspended by a cord (as from the mantelpiece or rafters) for a decorative effect. Witch balls appeared in America in the 19th century and are often found in gardens under the name "gazing ball". However, "gazing balls" contain no strands within their interior. 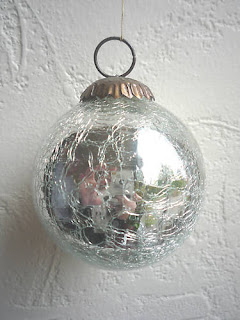 According to folk tales, witch balls would entice evil spirits with their bright colours; the strands inside the ball would then capture the spirit and prevent it from escaping.

Witch balls sometimes measure as large as 7 inches (18 cm) in diameter. The witch ball is traditionally, but not always, green or blue in color and made from glass (others, however, are made of wood, grass, or twigs instead of glass). Some are decorated in enameled swirls and brilliant stripes of various colors. The gazing balls found in many of today's gardens are derived from the silvered witch balls that acted as convex mirrors, warding off evil by reflecting it away. 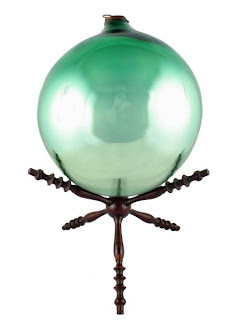 Because they look similar to the glass balls used on fishing nets, witch balls are often associated with sea superstitions and legends. In the Ozark Mountains, a witch ball is made from black hair that is rolled with beeswax into a hard round pellet about the size of a marble and is used in curses. In Ozark folklore, a witch that wants to kill someone will take this hair ball and throw it at the intended victim; it is said that when someone in the Ozarks is killed by a witch's curse, this witch ball is found near the body. 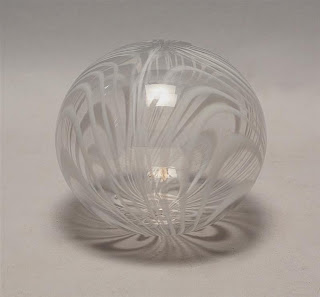 Sometime during the 18th century balls of blue and green glass were inscribed with scriptural texts in gold. A little later the Nailsea Glass Company in Bristol, England were making balls in a variety of colours and adding various forms of decoration. Some had splashed spots of colour, others air-twist spirals and, of course, the famous loopings, now generically known as Nailsea.

The word witch ball may be a corruption of watch ball because it was used as a guard of evil spirits.

It is sometimes claimed that the modern Christmas ornament ball is descended from the witch ball. The ornament was allegedly originally placed on the tree to dispel a visitor’s envy at the presents left beneath the tree. However as the modern Christmas bauble's origins are documented in Lauscha, Germany in 1847, the provenance of this claim is debatable. 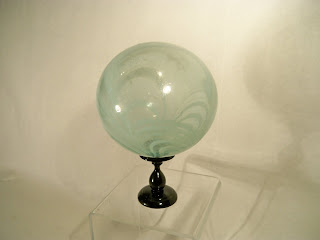 Research has disclosed that within months of the Boston & Sandwich Glass Company opening, they were producing glass witch balls on a steady basis. In the original document book (order book) it states that on "May 20, 1826, 170 witch balls were made, 21 / 2" in diameter." Subsequent entries of 31 / 2" balls were described as "large." Entries such as this go on for some years. It appears glass balls (for this and other purposes) made up a large portion of production. Obviously a lucrative business. Colours appeared in blue, green, amber, amethyst, opaque. These single colours were meant to be hung in barns to protect the livestock. Opaque splashed with red and blue, and the familiar clear with loopings and opaque with pink loopings, more decorative and reminiscent of Nailsea, were for the house. To date it is assumed that all witch balls at this company were made to hang. No official stands have so far come to light. Other companies also made them to hang, but in addition added matching stands, such as those from South Jersey. 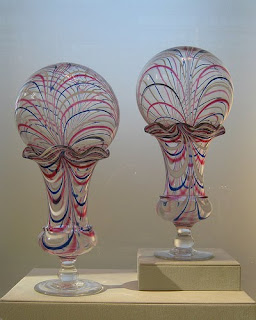 The Magic of Glass Witch Balls


http://en.wikipedia.org/wiki/Witch_ball
Posted by Gimmer at 3:15 PM

You amaze me..ou are a wealth of fascinating knowledge! I love folklore! Thanks!

I have been a student of folkore since I was a small child. I was lucky in college too I took a class called History of American Folklore from James Siar. He was a wonderful man. While I do not believe all Folklore to be true it delights my imagination and feeds my love of art and human history.