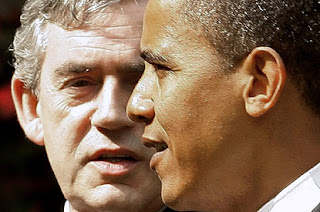 Guardian, UK - Gordon Brown lurched from being hailed as a global statesman to intense embarrassment, after it emerged US President Barack Obama had turned down no fewer than five requests from Downing Street to hold a bilateral meeting at the United Nations in New York or at the G20 summit starting in Pittsburgh today. The prime minister, eager to portray himself as a leading player on the international stage in America, was also forced to play down suggestions from inside his own party that he might step down early, either due to ill health or deteriorating eyesight. There have been tensions between the White House and No 10 for weeks over Brown's handling of the Scottish government's decision to release the man convicted of the Lockerbie bombing, Abdelbaset al-Megrahi. Brown's efforts to secure a prestigious primetime slot for his keynote speech at the general assembly in New York were also thwarted when the Libyan leader, Colonel Gaddafi, delivered a 100-minute speech to the UN, massively running over Brown's 15 minute slot.