Things just get more surreal in the UK by the Day. 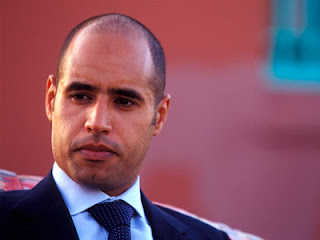 
The son of Libyan leader Colonel Gaddafi said today his country would resist demands from IRA victims for compensation after Gordon Brown launched a frantic damage limitation exercise over the Lockerbie scandal.

The Prime Minister announced that British diplomats would now assist the families of IRA bomb victims in lobbying the Libyan government for compensation.


But Saif al-Islam Gaddafi said any payouts arising from alleged Libyan arms supplies to the terror group would be a matter for 'the courts'.

And he condemned British politicians as 'disgusting and immoral' for using the case of Abdelbaset Ali Mohmed Al Megrahi to make political capital.

Of the looming British attempts to extricate compensation, the Libyan leader's son said: 'Anyone can knock on our door. You go to the court. They have their lawyers. We have our lawyers.'

And when asked if his answer to the compensation demand would be 'no' in the first instance, he replied: 'Of course.'

Asked whether the Prime Minister involved himself in the release of Megrahi, Mr Gaddafi said: 'He didn't.'

The discussions had been 'very, very technical', he told Sky News.


Only hours earlier Mr Brown announced that British diplomats would now assist the families of IRA bomb victims in lobbying the Libyan government for compensation.

But he refused to become personally involved or take up the issue directly with the Libyan dictator Colonel Gaddafi.

And he admitted that there was little prospect of success, conceding that ministers previously gave up trying to win compensation because of Libya's intransigence.

Nevertheless his intervention was welcomed by the victims' lawyer, Jason McCue.

'Now, with our PM's full support, I cannot see why this matter cannot be concluded swiftly in a matter of weeks and before parliament reconvenes,' he said.

The families have demanded cash from Tripoli because it was Libya which supplied the Semtex explosive used in IRA atrocities.

But leaked papers reveal that the Prime Minister blocked their campaign because he did not want to upset Gaddafi.

The revelation sparked claims that ministers abandoned the families of the dead because they were embroiled in a series of murky deals over trade, terrorism and the fate of the Lockerbie bomber, Abdelbaset Al Megrahi.

In a second blow to Mr Brown, his role in the negotiations over the release of Megrahi was also laid bare.

It emerged that Justice Secretary Jack Straw wrote to the Prime Minister warning the Libyans might block a multi-million-pound BP oil deal unless Megrahi was included in a prisoner transfer deal he was thrashing out with Tripoli in 2007.

That directly contradicts a previous claim by Mr Straw that there was 'no paper trail' to Downing Street.

The revelations were particularly toxic for Mr Brown since they reinforced accusations that he has misled the public about the scope of Labour's secret ties to Tripoli.

Shadow Chancellor George Osborne said: 'When Gordon Brown said there was no double dealing, no deals for oil, I don't think he was being straight with people.'

Victims of the Lockerbie bombing itself, which claimed 270 lives when Pan Am Flight 102 exploded in 1988, have received payouts from Libya.


And the White House won compensation worth up to £7million each from Tripoli for those who lost family members to other Libyan-sponsored terrorist atrocities.

But more than 2,500 British families whose loved ones were killed by Semtex supplied to the IRA by Libya are still seeking cash payouts from the Gaddafi regime.

Colin Parry, whose 12-year-old son Tim was killed by an IRA bomb in Warrington, Cheshire, said it defied belief that American government had secured a settlement for its victims - while the British government had not.

'I can't see why the British government won't take a similarly robust position with Libya.

'It does make Britain look very, very weak and insignificant if, for reasons of worrying about oil deals or other economic considerations, this government of ours is prepared to disregard all the pain of the thousands of victims of IRA terrorism.'

In letters to campaigners last October, the Prime Minister made clear that his government had no intention of helping-them.

'The UK government does not consider it appropriate to enter into a bilateral discussion with Libya on this matter,' he told their lawyer Mr McCue.

He said: 'I care enormously about the impact of all IRA atrocities on the victims, their families and friends.'


But he admitted that the Government just gave up when it became clear that the Libyans were not interested in doing a deal. And he implied that the wishes of terrorist victims would have to take second place to the need to placate the regime in Tripoli.

'Our priority has been to ensure that Libya supports the fight against terrorism and gives up its nuclear weapons,' he said. 'It is these concerns - not oil or commercial interests - that have long been the dominant feature of our relationship.'

In a statement, Mr McCue said: 'I am overjoyed that the PM has taken a principled decision and overruled the Foreign and Commonwealth Office. He has listened to ordinary folk rather than bureaucrats.

'When we met the PM in December 2008, we knew we had his sympathy; he said he would consider this matter and today he has taken the side of ordinary folk and justice. It is a great day for victims.

'I am confident that his moral and logistical backing for the British victims of Libyan Semtex will ensure that they now receive justice and compensation, as did the U.S. victims when they received the support of their President.'

Shadow Foreign Secretary William Hague said: 'The Prime Minister's announcement is a stunning admission that the Government has failed to support the families of the victims of IRA terrorism in their pursuit of compensation from Libya.

'Gordon Brown and the government he leads have long lost their moral compass and this is just another example of the disastrous mess and muddle in which they find themselves on the Megrahi affair.'

Tony Blair approved a secret meeting with Libyan spies in 1993 at which the fate of the bomber was thrashed out.

The discussions, held three days before Mr Blair announced that Colonel Gaddafi was abandoning his weapons of mass destruction programme, were a key step in the normalisation of relations with Libya. Even then Libyan officials stressed their interest in the case of Megrahi, then three years into his sentence.

MPs are to investigate whether the meeting paved the way for the trade deals and release of the bomber which followed.

A spokesman for Tony Blair said: 'Mr Blair fully supports the decision to integrate Libya back into the international community. However, the decision on Mr Megrahi was not one Mr Blair had any role in whatsoever.'
TERROR CHIEF'S THREAT

The bomber's release was negotiated by a former 'terror mastermind' who is one of Colonel Gaddafi's closest confidants.

Mousa Kousa, now Libya's foreign minister, threatened Britain that trade with his country would be damaged unless it agreed to send Megrahi home.

Minutes of a January meeting in Edinburgh reveal that he told Scottish officials: 'Megrahi's death in Scotland would not be viewed well by Muslims or Arabs. Nor would it be good for relations.'

His role has laid bare the degree to which British officials-have been forced to deal with questionable characters when negotiating closer links with Libya.

Kousa is accused by some intelligence sources of being the architect of the Lockerbie bombing. He was expelled from Britain in 1980 when head of the Libyan Embassy for publicly threatening to kill Libyan dissidents. He later became Libyan intelligence chief.

But he was invited back to London in 2003 to attend the secret meeting in the Travellers' Club which set the seal on closer Western links to Libya, and where Megrahi's fate was also discussed.

http://www.dailymail.co.uk/news/article-1211637/Browns-terror-U-turn-Well-help-seek-cash-Libya-bomb-families-told.html
Posted by Gimmer at 2:59 AM