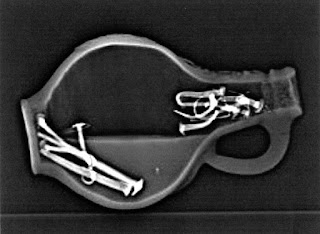 Discovery provides a unique insight into witchcraft beliefs of that period Human urine, pins and nails are seen in a CT scan of a 17th century "witch bottle" found buried upside-down in Greenwich.

During the 17th century in England, someone urinated in a jar, added nail clippings, hair and pins, and buried it upside-down in Greenwich, where it was recently unearthed and identified by scientists as being the world's most complete known "witch bottle."

This spell device, often meant to attract and trap negative energy, was particularly common from the 16th to the 17th centuries, so the discovery provides a unique insight into witchcraft beliefs of that period, according to a report published in the latest British Archaeology.

Lead researcher Alan Massey, a former chemist and honorary fellow of Loughborough University, believes "the objects found in witch bottles verify the authenticity of contemporary recipes given for anti-witchcraft devices, which might otherwise have been dismissed by us as being too ridiculous and outrageous to believe."

An Old Bailey court record from 1682 documents that a husband, believing his wife to be afflicted by witchcraft, was advised by a Spitalfields apothecary to "take a quart of your Wive's urine, the paring of her Nails, some of her Hair, and such like, and boyl them well in a Pipkin."

The excavated bottle appears to have been made according to those, or similar, instructions.

CT scans and chemical analysis, along with gas chromatography conducted by Richard Cole of the Leicester Royal Infirmary, reveal the contents of the bottle to include human urine, brimstone, 12 iron nails, eight brass pins, hair, possible navel fluff, a piece of heart-shaped leather pierced by a bent nail, and 10 fingernail clippings.

Although some 200 early witch bottles have been identified, all were found opened, with their contents likely eroded or otherwise lost. This artifact, in contrast, had its cork closure still intact.

The urine contained nicotine, so a smoker produced it. Since the fingernails showed little wear, Massey believes the individual was "of some social standing."

Brimstone, the ancient name for sulfur, is associated with passages in several religious texts, including the Bible. In the Book of Revelations, for example, "false prophets" were cast into a volcano-like lake "burning with brimstone."

In terms of the heart object, Massey said other witch bottles were found to contain "a cloth heart pierced by brass pins," but "this is the first example where a nail was used for this function." The meaning remains unclear.

The bottle itself is actually a salt-glazed jar made in the Netherlands or Germany and stamped with the face of Cardinal Roberto Bellarmino (1542-1621), who played an important role in the Catholic Reformation.


Massey believes witch bottles "emphasize just how frightened people were of the 'black arts' — the early settlers even took their superstitions to the New World with them as excavated witch bottles demonstrate."

The general time period of the bottle coincides with the Salem Witch Trials, which happened in late 1600's America.

Archaeologist Mike Pitts, the editor of British Archaeology, told Discovery News, "The discovery of something so apparently bizarre, indicating a clear belief in witchcraft and forces that have nothing at all to do with conventional, approved religion, remind us that early modern England did not belong to the same world we now inhabit." 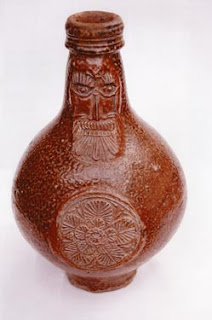