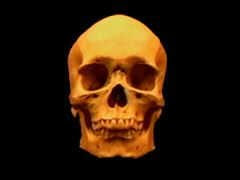 LONDON (Reuters) – An ancient burial pit containing 45 severed skulls, that could be a mass war grave dating back to Roman times, has been found under a road being built for the 2012 British Olympics.

Archaeologists, who have only just begun excavating the site, say they do not yet know who the bones might belong to.

"We think that these dismembered bodies are likely to be native Iron Age Britons. The question is -- how did they die and who killed them," said dig head, David Score, of Oxford Archaeology.

"Were they fighting amongst themselves? Were they executed by the Romans? Did they die in a battle with the Romans?

"The exciting scenario for us possibly is that there were skirmishes with the invading Romans and that's how they ended up chopped up in a pit," he told Reuters.

The skulls and other bones were unearthed at a place called Ridgeway Hill, on the construction site of a new major relief road to Weymouth, on the Dorset coast in southwest England.

The seaside town -- in the heart of Thomas Hardy country -- is to host sailing events for the London Olympics.

The grave site is close to Maiden Castle -- Europe's largest Iron Age hill fort where local tribes are said to have staged a last stand against the Roman legions after the invasion.

Some historians believe the Romans sacked the site, butchering its population including women and children, before burning it to the ground.

Score said they had counted 45 skulls so far in the 6-meter wide pit, together with a tangle of torsos, arms and legs, More could be found in the coming weeks.

Most of the skulls were those of young men, supporting the theory they could have been killed in battle or executed en masse.

"One of the things that we will be looking for is do they have sword cut marks on the bones, and how were the heads dismembered: prior to or after death in an act of victory," Score said.

Archaeologists say they could also be Roman citizens or indigenous people who had died through disease or disaster.

Few artifacts have so far been found with the bones, though pottery shards dating to the late Iron Age and early Roman period have been found scattered around the pit.

"It is rare to find a burial site like this one," Score said. "There are lots of different types of burial where skeletons may be aligned along a compass axis or in a crouched position, but to find something like this is just incredible."