Susan Boyle hasn't a hope in hell of a normal life back home, friends warn 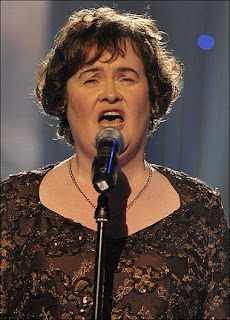 Published Date: 02 June 2009
By MARTYN McLAUGHLIN
SUSAN Boyle has "no hope in hell" of finding peace in her home town, as the ongoing media clamour over her welfare and future shows no sign of abating, friends warned yesterday.

Having been catapulted from anonymity to worldwide fame in less than two months, the 48-year-old was admitted to a London clinic on Sunday evening, suffering from exhaustion.

The singer, who is expected to recuperate in the Priory for several days, received a
message of support yesterday from Prime Minister Gordon Brown, two days after finishing runner-up in the Britain's Got Talent television show.

Neighbours in Blackburn, West Lothian, have appealed to her to return home to receive support. However, there are fears the remarkable international media attention paid to the singer since her first appearance on the programme on 11 April will only increase.

"She is just an ordinary girl from an ex-mining village who could walk down the street a few months ago quite happily," Ms Russell said. "Now, she can't even come home. Everyone in Blackburn is exhausted with the media attention, and the press always know where she'll be, and who she's with. There's not a hope in hell she'd get peace here.

"The media has reported she had a meltdown because she didn't win, but not winning had nothing to do with it. She's a very gracious lady and wouldn't take losing to heart."

The Prime Minister told GMTV yesterday he had sought reassurances from the show's judges that Ms Boyle was well.

Ms Boyle's brother, Gerry, said his sister remains happy and just needs to "get her head around" celebrity; but Fred O'Neil, her friend and former voice coach, called her plight "a tragedy", claiming fame had not brought her happiness.

He said: "It's such a tragic situation, a woman who really just loves to sing, an innocent woman really, who is just caught up in this fame game."

Publicist Max Clifford agreed that, no matter the result of Saturday night's final, Ms Boyle would have struggled to cope with her sudden rise to fame.

Stressing the need for her to be surrounded by friends and family, he said: "What they've got to do is assess how she is before knowing what's best to do."

Piers Morgan, one of the show's judges, said Ms Boyle's admission to the clinic was "not a very serious matter", and predicted she would be recording the year's biggest-selling album in a few months.

"I don't think she wants to go back to Scotland and disappear again," he added.

Plans are well advanced for Ms Boyle to play a US tour, before recording an album with the Czech National Symphony Orchestra. She is also due to join the Britain's Got Talent arena tour, which begins on 12 June.

Opportunity still knocks for the unexpected star to win through

THERE is a lot of stress for contestants in such shows, writes Cynthia McVey.

There is the stress of trying to produce the best performance they can, and for Susan Boyle there was also the stress created by the assumption that she was going to win.

When she entered the show she probably thought she would have been lucky to get through – then suddenly everything changed because of the attention from America.

I don't think you can really blame the show's producers, because it is just the nature of these competitions.

I assume they would have had some sort of psychological testing to make sure the people taking part were not too vulnerable and would not be affected too badly by the stress of the contest.

At the moment Susan Boyle might be feeling rejected by the public, but with the right sort of support she should still be able to enjoy the fruits of her talents.

• Cynthia McVey is head of psychology at Glasgow Caledonian University and an adviser to television producers.