Susan Boyle gets a standing ovation 
Perhaps it was the absence of the judges or the fact she knew she had nothing to lose.

But when Susan Boyle stepped on to the stage for the Britain's Got Talent live tour in Birmingham on Friday, she showed none of the nervousness she had demonstrated in previous performances.

The Scottish spinster, who left The Priory just nine days ago after suffering from 'exhaustion', was given a standing ovation after performing two songs.

Miss Boyle got off to a faltering start, appearing to be slightly out of time during the first verse of Memory from Cats - the song she performed in the Britain's Got Talent semi-final.

But she soon seemed to get into her comfort zone, lapping up the crowd's cheers and looking a different person to the fragile individual who entered the Priory.

Wearing the same floor-length glittering dress she sported in the show's final, Miss Boyle reached her arms out to the audience and blew kisses during her performances of Memory and I Dreamed A Dream.

Before exiting the stage, the Scottish spinster replaced her trademark shimmy with a more dignified bow.

'Everyone was wondering how Susan was going to do,' one crowd member said.

'But she looked confident and her voice sounded amazing. She didn't look like someone who was in the Priory just a week ago.' 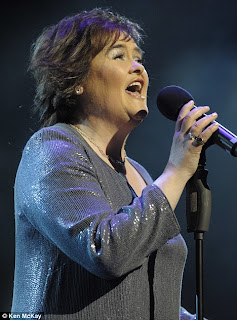 http://www.dailymail.co.uk/tvshowbiz/article-1192714/Susan-Boyle-gets-standing-ovation-wowing-crowd-night-Britains-Got-Talent-live-tour.html
Posted by Gimmer at 3:35 AM